New regulations for taxis and ride-hailing in the UK

Following the UK Government's outline of its approach to regulating the taxi and ride hailing sector, Inline has produced a guide to the most important changes coming down the line for companies operating in the space.

The Task and Finish Group on Taxi and Private Hire Vehicle Licensing’s report contained more than 30 recommendations for significant and intrusive regulatory reform in the sector. The Government’s response accepts the need for a number of new regulations but stops short of the wholesale reform advocated by the Task and Finish Group report.

The Government’s approach set out in its response is essentially fourfold:

We have summarised the key points of the Government’s response below and you can download our full briefing on the details of the Task and Finish Group’s recommendations and how the Government has responded here.

Alongside its response to the Task and Finish Group, the Government published a consultation on what should be included in the statutory guidance for licensing authorities. It will be important that companies in the sector influence the development of the national minimum standards and ensure that new regulatory requirements are practical and do not endanger efficient business models.

The Task and Finish Group Report

The Task and Finish Group was commissioned by the Government following a series of debates in Parliament on the future of regulation in the taxi and private hire industries. The Group was made up of representatives of Parliament, the industry, drivers and licensing authorities, however the output of the Group was a report with recommendations from the Group’s chair Professor Mohamed Abdel-Haq. All members of the Group disagreed with some of the recommendations in the report and had the opportunity to write their own comments in an annex to the report.

The report itself was published in September 2018 and contained 34 recommendations covering a wide range of areas, including passenger safety, driver working conditions and the consistency of licensing standards across the UK – for full details the report’s recommendations, please see our briefing.

The Government has said that it will bring forward legislation which will introduce national minimum licensing standards. In the interim the Government has opened a consultation on its statutory guidance. This guidance covers a range of areas that licensing authorities should consider, including:

Responses to this consultation will shape not just the guidance issued by central Government to local licensing authorities, but also the development of the national minimum standards.

Currently local authority enforcement officers cannot take enforcement against drivers who are operating within their jurisdiction but are licensed by another local authority. New legislation is required to both create the national minimum standards and to empower licensing authorities across the country to enforce those standards regardless of where the driver is licensed. Writing, consulting on and taking this legislation through Parliament will take some time, especially given the legislative logjam created by the UK’s exit from the European Union. There is likely to be continued significant lobbying from the industry, local authorities and safety campaigners seeking to shape the legislation to their interests.

The Task and Finish Group recommended the creation of two databases – one of all drivers holding a taxi or private hire licence, and one of all licensing authority decisions to revoke or refuse a licence and the reasons why. Labour MP Daniel Zeichner has introduce a Bill in Parliament which would require authorities to use a database of refusals and revocations. The Government has stated its support for this Bill, which gives it a reasonable chance of progressing through Parliament and becoming law. The Government will include similar measure is its legislation to create a national database of all licensed taxi and private hire drivers.

In a separate announcement made on the same day, the Department for Environment, Food, and Rural Affairs (DEFRA) announced it would take forward proposals for a national database of licensed taxi and private hire vehicles which local authorities can use in order to track these vehicles entering Clean Air Zones around the country. The database is designed to be used in conjunction with automatic number-plate recognition cameras in order to allow local authorities to apply charges or exemptions to taxis and PHVs when driving in designated Clean Air Zones. 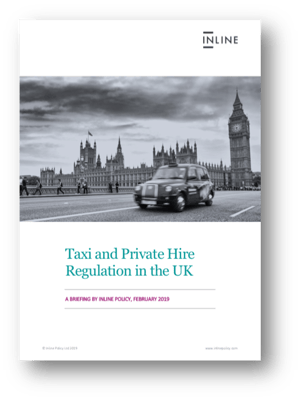 The Government has decided not to take up some of the more controversial recommendations from the Task and Finish Group report. It has declined to give local authorities the power to cap the number of private hire vehicles within their jurisdiction, citing concerns about the unintended consequences on consumers of higher prices and inadequate supply.

The Government also failed to endorse the merging of licensing authorities in large urban areas governed by Metro Mayors, such as Greater Manchester and the West Midlands, preferring instead to encourage local authorities to co-operate on a voluntary basis. This will not be welcomed by the industry, who were generally supportive of having to deal with fewer licensing authorities.

On the issue of installing video and audio recording capabilities in all taxis and PHVs the Government has made supportive comments but ultimately is leaving the issue to the discretion of local licensing authorities. This means companies and drivers will continue to face a patchwork of regulations in this area.

The Government made a number of commitments to explore certain issues in more depth, or as part of other ongoing policy programmes. Most significantly, the Government has agreed in principle with a recommendation to mandate that all taxi and PHV journeys either start or finish in the area where those vehicles are licensed, thus effectively ending the practice of “cross-border hiring”, whereby any licensed driver can operate anywhere in the country. The Government has said that it will consider further the practicalities of implementing this recommendation, with a view to introducing legislation.

The Task and Finish Group’s recommendation that licensing authorities should consider an operator’s compliance with the National Living Wage as part of its “fit and proper” person test when processing applications for operator licenses was accepted, and the Government has said that it will legislate to improve the clarity of employment status tests as part of its Good Work Plan.

The existing demarcation between Private Hire Vehicles and Public Service Vehicles, under which any vehicle with fewer than nine seats falls into the former category, will be explored as part of the Future of Mobility Grand Challenge, the Government workstream on all things mobility.

How should mobility tech businesses respond to these developments?

These announcements present something of a mixed bag for PHV and taxi operators in England (regulation of taxis and private hire vehicles is a matter for the devolved administrations in Wales, Scotland and Northern Ireland). The most obvious threat – that of licensing caps – has been ruled out for the foreseeable future. Operators are also unlikely to be severely affected by new national minimum standards, although such standards might reduce the number of willing drivers. Any review of the distinction between PHVs and public service vehicles could well result in a more flexible interpretation of these two categories and allow for new business models, such as on-demand buses, to enter the market.

On the other hand the potential clampdown on cross-border hiring could affect certain operating patterns, such as airport transfers, adversely, and may prevent drivers who are taken far away from their licensing authority from accepting another trip for quite some time, thereby affecting the commission which intermediaries can take from such trips. Companies in the space may also wish to pay close attention to the development of the national minimum standards. The draft statutory guidance on best practice which is currently out for consultation contains some potentially onerous requirements, including subjecting PHV operators to basic Disclosure and Barring Service checks, and asking them to keep a record of all staff who handle bookings.

The publication of the Government’s response to the Task and Finish Group report represents the beginning of a process of consultation, discussion and legislation. In particular, the current consultation on statutory guidelines has the potential to shape the future minimum standards which the Government legislates for, and companies should engage on these guidelines from now to ensure that they are not faced with minimum standards which impose an unbearable burden on their business.

Looking further into the future companies will want to track the developments that are happening in parallel to this. The Department for Transport will soon be unveiling its Future of Urban Mobility Strategy which will look holistically at urban transport and seek to ensure that UK cities are well equipped for emerging technologies including Mobility-as-a-Service, connected and autonomous vehicles and ride sharing. DEFRA is working on its database of all PHV vehicles in the UK, and the Department for Work and Pensions will be clarifying rules around employment relationships which will pertain to PHV drivers as well as other gig workers. Today’s announcements, important as they are alone, form part of a broader ecosystem of regulatory reform that could have a major impact on innovative businesses.

Inline Policy is the specialist public affairs company for tech businesses with a strong track record of supporting innovative mobility businesses. Whether you wish to gain a deeper insight into these developments or want to influence proceedings to ensure that your business remains profitable and compliant, we are able to help. You can subscribe to our regular updates on mobility policy by filling in the form below.