As the number of self-employed people continues to rise in the UK, the need to provide support to this growing workforce is becoming increasingly important. But how can access to benefits and protections be improved, without relying on the incumbent employment relationships through which these are traditionally delivered? Emergent WorkerTech technology and applications may be part of the solution.

To do this requires solutions that lie outside, although not totally divorced from, the current model of delivering protections and benefits to employees or workers through formal contractual terms.

Technology that lowers the cost of providing protections and benefits could prove the big breakthrough here: emergent WorkerTech applications can offer employee-style arrangements for the self-employed, while still being a personalised choice. 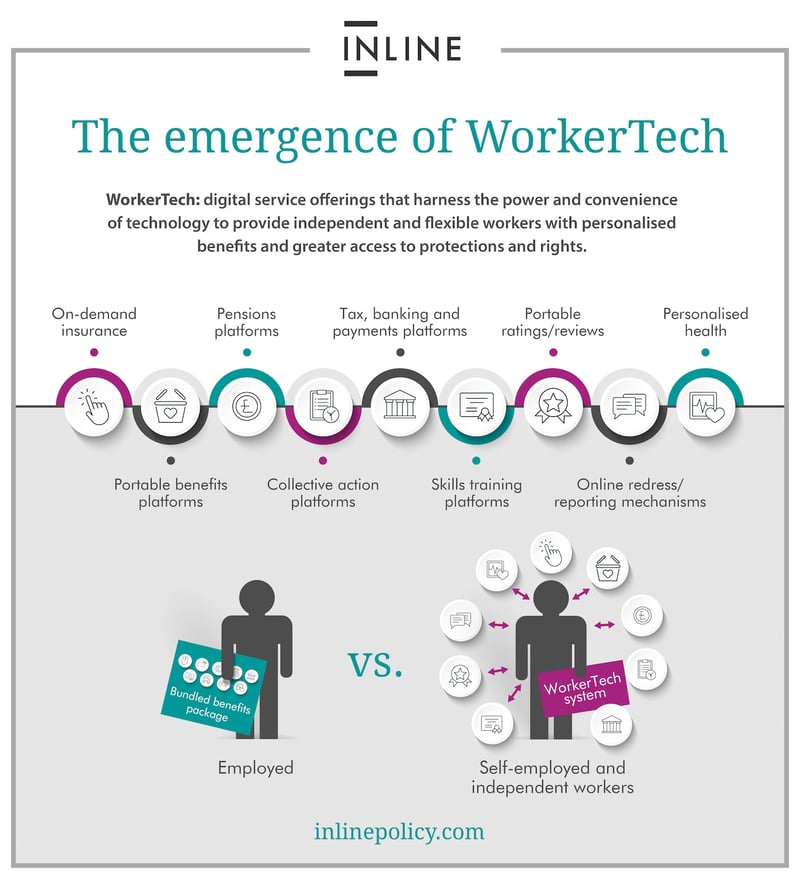 The tension between flexibility and protections for the self-employed

The autumn will see the release of the Government’s responses to the four consultations launched following Matthew Taylor’s Review of Modern Working Practices. One of these consultations addressed employment status, the issue which lies at the heart of high-profile legal battles between gig economy companies and workers, such as those involving Uber, Hermes and Pimlico Plumbers.

These legal wrangles have consistently highlighted the ostensible incompatibility between the flexibility that is intrinsic to self-employment, and the protections that the self-employed nonetheless want to access. Nowhere has this been more apparent than in the cases involving those gig economy platforms that would risk the reclassification of their independent workforce, were they to offer them more benefits or protections.

Indeed, Deliveroo has recently called on the government to introduce a ‘charter for secure flexible work’. The company, which is making free accident insurance available to all of its 35,000 riders globally, says it would like to go further in providing benefits but fears that this would lead to riders’ employment status being reclassified through the courts. The company wants the government to allow gig economy platforms to offer accident or third-party liability insurance, holiday pay and training without being considered employers.

Deliveroo’s proposal acknowledges what has long been recognised in the gig economy debate: that whatever the legal structures currently in place, the self-employed need more support than they currently get. A new approach would allow independent working arrangements to persist, while making it easier for the self-employed to save towards pensions, pay tax in a more manageable way, and even carry their ratings and reviews with them between platforms.

This new approach is encapsulated in WorkerTech apps and services

But how can access to these services be improved, without relying on incumbent employment relationships, through which such benefits are traditionally delivered?

In its initial response to the Taylor Review the Government committed to the creation of a “WorkerTech Catalyst”. At the time, the concept of the Catalyst was based around collective action platforms alone. However, bringing workers together for collective representation is only one way that technology can revolutionise self-employment. In a way that has not been possible before, technology allows the creation of services and benefits that can be accessed on an individualised basis.

The past few years have seen promising signs in the development of WorkerTech solutions. Start-ups have taken advantage of gaps in the market and regulatory moves to open up sectors like insurance and banking, to offer products that are specifically designed to support the self-employed and gig workers. Meanwhile, some larger companies are responding to the trend by offering new ways of accessing their established services which make them more attractive for the self-employed.

For instance, a freelancer can choose to use a banking app that accounts for tax on a monthly rather than annual basis, helping them avoid a large lump sum payment. They can access insurance that is activated only at such time as they are actually working, using smartphones and links to gig economy platforms to capture the relevant information.

Crucially, as these WorkerTech applications and services are independent of gig economy platforms, or work providers more generally, they can provide the individual with access to benefits and protections without compromising their self-employed status, solving the problem articulated above by Deliveroo.

A changing approach to supporting the self-employed

And it is not just the industry that has advocated this new approach. In July this year, the Office of Tax Simplification (OTS) published a discussion paper on Platforms, the Platform economy and Tax Simplification. The OTS recommended compelling gig economy platforms, such as Uber and Deliveroo, to offer to withhold tax on behalf of workers and transfer it to HM Revenue and Customs (HMRC); in other words, instigating a form of PAYE (pay-as-you-earn) for gig workers. The aim would be to ease the compliance burden while spreading tax payments out throughout the year, in a way that is more manageable for freelancers, many of whom face large lump-sum payments at the end of the tax year. The OTS recommends that government finds a way to implement this sort of system without affecting the employment status of the people involved.

The pertinent implication of the OTS’s recommendation is the recognition that, although being classified as self-employed means the individual is in charge of their own affairs, the reality is that people, especially those working long hours for low wages, need more support than that. Tax paid in a single payment may be part of the deal of self-employment, but that does not lessen the impact on the individual of so-doing. This is also true of pensions, health insurance and other benefits and protections that are often included in employee or worker relationships, but that the self-employed have to arrange for themselves. The OTS proposal exemplifies the way in which government could create new systems that ease the burden on the self-employed in these arenas without necessarily having to rewrite tax legislation.

The OTS also identifies how rule changes by government may create the impetus for new WorkerTech innovation from the private sector. The OTS’s paper describes how new business bank accounts designed for the self-employed which offer accounting automation as part of the service, are now coming onto the market from providers such as Coconut. The paper goes onto to suggest that this type of WorkerTech innovation has been driven by the Government’s Making Tax Digital programme for digital record-keeping and quarterly tax updates from small businesses. This is a good demonstration of how WorkerTech can simultaneously get around some of the practical issues faced by the self-employed and the policy issues faced by government.

WorkerTech is not just for the gig economy

A further advantage of WorkerTech solutions is that they can service more than just the Uber or Deliveroo drivers that are commonly understood as making up the gig economy. The gig economy actually encompasses a much wider range of people than Uber or Deliveroo drivers alone. Indeed, according to the RSA and Ipsos Mori, the largest proportion of ‘gig workers’ (28%) are carrying out professional work, such as accounting or legal advice. A similar number (26%) perform creative work, with a smaller proportion (17%) performing the sorts of personal services, such as DIY or cleaning, that are often taken on a job-by-job basis. Only 11% are providing driving or taxi services, and only 9% delivery or courier services.

Why is this important?

As these numbers continue to rise, the imperative to lower barriers to the self-employed accessing protections and benefits will only grow stronger. To read more about the WorkerTech applications and initiatives that are already helping the self-employed, please download our free white paper.

What next for the Online Safety Bill?

The Online Safety Bill is the UK Government’s flagship piece of digital regulation, the British equivalent of ... Read more