EU elections 2019 - the results and implications for the tech sector

The 2019 European elections mark a pivotal movement for the European Union and the tech sector. Download Inline's free guide to the election results and the implications for the tech sector.

** UPDATE: Download our up to date guide to the new European Parliament for the tech sector here **

With almost all the results now in, it is clear that MEPs for the coming 2019-2024 term will work in a more politically and ideologically diverse Parliament and this is likely to have a significant impact on the pace and direction of legislation, as well as on the influence of smaller parties. 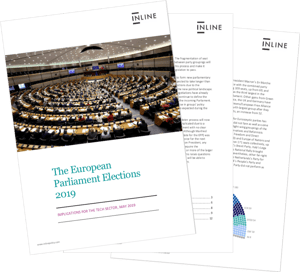 Who will lead the Parliament's agenda?

Provisional results indicate that the European Parliament’s two largest political groups, the European People’s Party (EPP) and the Progressive Alliance of Socialists and Democrats (S&D), have shed seats and lost their combined absolute majority. The strong performance of the En Marche party in France will strengthen the Alliance of Liberals and Democrats in Europe (ALDE) group and this is expected to give them considerable influence over the formation of new group coalitions. Voter support for Green parties across Europe - particularly Germany, France and the UK - will boost the Greens/European Free Alliance (EFA) parliamentary group.

Populist, nationalist and Eurosceptic parties also gained seats with national parties including Italy’s Lega Nord and the UK’s Brexit Party performing strongly. Right-wing political parties nevertheless remain divided on key policy issues, particularly budgets, and may not be able to form a coherent bloc in Parliament to exercise a common voice. The fragmentation of seat allocations between party groupings will also complicate the legislative process and increase the uncertainty and unpredictability of the Parliament. The need for negotiation and compromise at many stages of the legislative process is likely to lead to the watering-down of policy positions in order to gain traction on key files.

What are the implications for the tech sector?

The 2019 European elections are the most significant yet for the tech sector. Policymakers in the coming term are widely expected to focus on areas from corporate and digital taxation, data regulation, competition amongst online platforms, and privacy.

The tech sector, and in particular, 'big tech' has been under attack from both the right and the left in politics - whether over claims of political bias, surveillance capitalism, anti-competitive behaviour, tax-dodging, or exploiting workers. These claims may have started on the fringes, but are now in the mainstream of political debate across the EU. With a more radical group of policymakers within the Parliament and a crowded regulatory and political agenda, the tech sector in Europe will need to understand changing political dynamics within the Parliament and how these will affect their business.

Stay informed with our briefings

As we enter a crucial few months in the EU timetable with parliamentary group negotiations, the formation of new parliamentary committees, nominations of national Commissioners and, crucially, the nomination of the new President of the European Commission, our 2019 European Elections briefing outlines the forthcoming policy agenda for tech and highlights some of the key MEPs to watch.

To receive a copy of the briefing via email please fill in the form below:

With a background in political and economic analysis, Owain joined Inline Policy in 2019. He provides political analysis and monitoring for the sharing economy, online platforms and emerging technology clients from Inline Policy’s Brussels office. He has a particular interest in the short-term accommodation market and writes a weekly newsletter covering the sector.

The three EU institutions - Commission, Parliament and Council of the EU - reached a provisional agreement on ... Read more

Who are the UK's digital regulators?

Eight steps the Government is taking to turn the UK into a global services, digital and data hub

With the terms of the UK’s exit from the EU largely settled, the UK Government has begun to turn its ... Read more