In July, the Financial Conduct Authority (FCA) – the body that regulates loan-based and investment-based crowdfunding in the UK – launched a ‘call for input’ on the current rules applied to crowdfunding in the UK. The review comes two years after the FCA first took over regulatory responsibilities for this burgeoning sector. In the FCA’s own words, they “want to explore concerns that have been expressed about developments in some aspects of the market”. From the outset, the publication strikes a more cautionary tone to previous statements on the crowdfunding market.

Although this review of crowdfunding was anticipated, it comes during precarious times. In the US, peer-to-peer lending firm LendingClub - the world’s largest online marketplace connecting borrowers and investors - recently posted a net quarterly loss 20 times greater than a year ago. In May, LendingClub admitted it mis-sold loans and subsequently dismissed its Chairman and Chief Executive. In the UK, perceived lax crowdfunding rules have drawn criticism from the former Chair of the Financial Services Authority (FSA) Lord Turner, and forced the current Chair of the House of Commons Treasury Select Committee Andrew Tyrie MP to write to both the FCA and the Prudential Regulation Authority (PRA) to ask that they examine certain risks posed by the crowdfunding sector. This increasing scrutiny of the regulatory framework is in contrast to mood within the sector two years ago, when Chancellor George Osborne exclaimed that the UK would lead the world when it comes to Fintech.

A longlist of potential risks

The FCA outlines a number of potential risks that have could develop in the crowdfunding sector. If the FCA decides to reform crowdfunding rules, here are some of the risks that it has highlighted where we can expect the FCA to potentially take action. The risk that:

It is worth highlighting a couple of these risks. First, the FCA has made it clear that it is apprehensive about the changing nature of the investor base in the sector. A recent Nesta report claims that, within the crowdfunding market, “26% of business loans and 32% of consumer loans were funded by institutions in 2015”. The FCA believes that this trend opens up the possibility of favourable treatment of institutional investors - for example, the chance to review and invest in loans before retail investors can do so. Returning to its original mandate of consumer protection, the FCA stands ready to intervene if it believes that retail investors are burdened with a higher degree of risk, due to such unfair practices.

The rise of institutional investors

Secondly, the FCA does not currently impose a due diligence standard which investment-based companies must apply to firms listed on their platforms. The FCA makes it clear that if it finds “investors are not in a position to protect their own interests, we may consider the feasibility of minimum due diligence standards. For example, we could consider requiring business plans to be reviewed by an appropriate third party.” 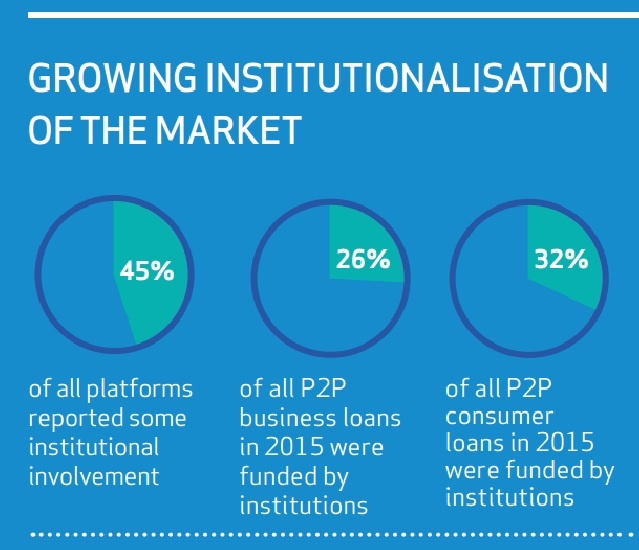 Up until now the FCA has taken a reasonably light-touch approach to the regulation of crowdfunding, both lending-based and investment-based. This FCA publication takes a more forthright tone, due in large part to the external pressures that it has come under from the Treasury Committee; previous Bank of England Directors; and market events in the US. As mentioned, there are numerous possible flashpoints where the FCA may choose to intervene. This could result in many incremental amendments and tightening of the rules across the board, rather than a wholesale reform of the rules applied to the crowdfunding sector.

The FCA will accept comments on the ‘call for input’ until 8 September. Following these it will consider the feedback and use it to inform additional analysis that it will conduct in the coming months. If it sees fit, the FCA will then consider publishing a consultation paper with proposals for explicit rule changes.

As if there weren’t enough variables to contend with, the FCA also recognises in the publication that “changes may be needed as a result of the Brexit negotiations”. The coming months and years will see many possible changes which may alter the make-up of the crowdfunding sector – some of which the sector has an integral role in developing at a national-level, and some of which involve crucial international trade negotiations.

Conor is an experienced consultant who advises clients in the data economy, insur-tech, and energy sectors.

Who are the UK's digital regulators?