Over the last two years ride hailing policy in Spain has been mired in conflict between the industry, taxi drivers, national government, local governments and competition authorities. Rules have been changed, challenged, revised and devolved, leaving a fragmented system that does not work well for any of the stakeholders. During this period, we have seen companies forced out of major markets and unrest spilling out onto the streets in the form of strikes and sometimes violent protests.

What lies behind this complex and confusing situation is a regulatory settlement that satisfies nobody. While policymakers in Spain have had legitimate concerns throughout, the approach to regulation has often been ill thought out, unrealistic and, in some cases, excessive. While some aspects of the pushback against disruptive technology firms is to be expected, some regulatory responses in Spain have seemed to aim at making their existence near-impossible, rather than trying to incorporate them into the existing regulatory environment and economy.

Spain is therefore an example of what can happen when regulating disruptive technology goes wrong. Below, we have explained the key stages of regulatory developments and their implications.

The role of the Rajoy Government – the 1:30 rule

The root of the current regulatory turmoil can be traced back to 2015, when Spain’s Government under Prime Minister Mariano Rajoy passed a law fixing the number of private hire (VTC) drivers in Spain to one for every thirty taxi drivers. In passing this law, the Spanish Government was seeking to assuage concerns around over-supply of VTC drivers, especially in the context of the growing popularity of ride hailing apps, such as Uber and, Spain’s home-grown VTC, Cabify.

However, at the time the law was passed, in most of Spain, there was already more than one VTC driver for every 30 taxi drivers. The Spanish Government and courts were therefore caught between two competing policy problems: the concerns about over-supply on the one hand; and the desire to respect the property rights of existing and prospective VTC licence holders on the other.

The problem was exacerbated in 2017 when Spain's Supreme Court ruled that drivers who had submitted licence applications prior to the 1:30 rule being introduced could have their licences confirmed, even if this would mean further dilution of the 1:30 ratio. Nevertheless, the Spanish Government stuck to its commitment, and despite warnings from the National Competition and Markets Commission (CNMC), the Government reiterated its support for the ratio in April 2018.

Doubling down on its commitment to the 1:30 rule generated anger amongst taxi drivers and a desire for action at the local level. Taxi drivers were dismayed that, despite the Government’s apparent support for the rule, the actual ratio continued to move in favour of VTC drivers. Regional authorities, including Madrid and Barcelona, considered introducing a new kind of VTC licence in order to enforce the 1:30 rule, with all existing drivers having to apply for the new licence. This would have, in effect, stripped the majority of VTC drivers of their existing licences.

Sanchez comes to power – the road to devolution

Taxi driver dissatisfaction led to protests across Spain. Significantly, Prime Minister Rajoy was deposed following an unrelated scandal, and replaced by Pedro Sanchez, the leader of the Spanish Socialist Workers Party (PSOE). Sanchez’s administration met with taxi representatives over the summer of 2018, looking for a solution to the impasse. In the end, they took the advice of taxi representatives, and announced that, from September 2018, licensing would be devolved to the regional units of Spanish governance, the Autonomous Communities.

This solution pleased taxi drivers, but not VTC drivers, who threatened to sue the Government if their licences were rendered obsolete. Sanchez’s Government backtracked somewhat and introduced a moratorium of four years on existing licences, after which licensing competencies would become fully devolved to Autonomous Communities. They also announced a national online database of all VTC journeys.

This solution failed to assuage the concerns of VTC drivers, more than 10,000 of whom signed a petition claiming compensation due to the scheduled obsolescence of their licences. It also enraged taxi drivers, who sued the Government for breaching State Aid rules. Furthermore, it attracted the attention of Spain’s competition authority, which stated that it wished to be consulted on any and all future rules for the sector.

The rise of local rules

The most significant aspect of the Sanchez Government’s devolution of powers was that, although it prevented the local governmental bodies from explicitly banning ride hailing, it gave them competencies to regulate all other aspects of VTC operation. The Autonomous Communities and municipal governments could therefore not ban VTCs, nor introduce new licences to enforce the 1:30 rule, but they could regulate almost every other aspect of the industry.

Some regions chose to integrate the new forms of transport with the old. The Basque Country and Galicia both introduced rules obliging ride hailing vehicles to display signs denoting them as such. Madrid liberalised the taxi market somewhat, and imposed the taxi drivers’ obligations on VTC drivers, including a mandatory two days of rest per week.

Other regions, however, used the devolved powers to impose burdensome regulations on the industry. Valencia and Catalonia, to name just two, created new rules stipulating that VTC journeys had to be booked at least 15 minutes in advance, thereby removing the instant booking appeal of ride hailing apps. Uber promptly left both regions. The City of Barcelona, which had further regulatory rights devolved to it by the regional government of Catalonia, increased this waiting period from 15 minutes to one hour. Other regions, including Andalusia, banned VTC vehicles from certain areas of cities, or from picking -up or dropping-off passengers close to public transport hubs.

These rules have experienced pushback, particularly from competition authorities. In February 2019, shortly after the introduction of the 15-minute mandatory wait by the Catalan Government, the Catalan regional Competition Commission instructed Catalonia’s Parliament not to ratify the regional government’s plans. In August, the National Competition and Markets Commission announced its intention to litigate against Barcelona’s ride hailing regulation in the Supreme Court.

What can we learn from the Spanish experience?

What can we draw from the experience of regulating the ride hailing industry in Spain? The Spanish Government, and subsequently the regional governments, clearly have concerns about the industry, and in particular around over-supply of vehicles and the subsequent impact on congestion, the proliferation of work that is seen by some as insecure and low-paying, and the perception that ride hailing undercuts the traditional taxi industry. These concerns are shared by policymakers in cities throughout the world, as readers of Inline Policy’s Sharing and On-Demand Transport Sector News Summary will know.

Innovative and disruptive technology businesses must always expect pushback from regulatory authorities. On the other hand, the Rajoy Government made a policy commitment which was virtually unachievable by committing to a ratio of VTC drivers to taxis that had long since been surpassed. The inability to reach this target angered taxi drivers, who felt that promises made to them had been broken, and alarmed competition authorities, who suspected that draconian and anti-competitive measures would be needed to enforce the rules.

The problem was then exacerbated by the subsequent Sanchez Government. Although devolving competencies to local authorities is not necessarily a bad idea, especially in the case of transport where needs can be very different according to region, the manner of the devolution has led to a proliferation of extremely different regulatory systems (as shown on the map below), causing major regulatory fragmentation across Spain. 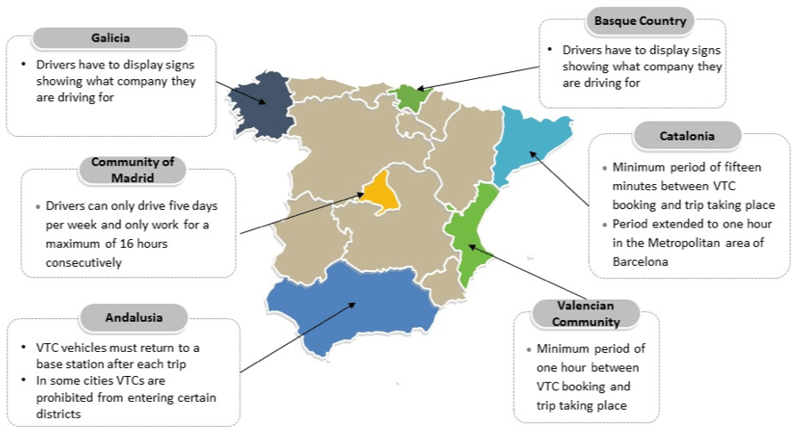 Finally, certain regional authorities are guilty of using policy as a sledgehammer to crack a nut. Although authorities’ concerns are genuine, the laws introduced in Valencia and Catalonia are overly onerous and designed to make it almost impossible for ride hailing companies to operate on their current model.

Nevertheless, in some ways, the experience in Spain provides a useful case study for the ride hailing sector, and the wider tech industry. It demonstrates what happens if politicians use a knee-jerk reaction to regulate disruptive technology. Simply trying to ‘put the genie back in the bottle’ does not work for politicians, regulators, industry, or – ultimately – consumers.

The situation in Spain demonstrates the need for consistent and open dialogue between regulators and businesses. If regulators do not trust businesses, or if they do not understand how they operate, they will design regulation that has a deleterious effect on the ability of businesses to operate. Likewise, if businesses do not show that they understand the concerns that regulators have, and attempt to assuage those concerns, then they will elicit onerous regulatory responses.

Inline Policy is the leading political and regulatory consultancy for tech firms, having helped tech businesses to understand and engage with policy across a number of sectors. We have particular experience of helping disruptive businesses, such as Onefinestay and YoBike, to enter markets and work to establish the right regulatory relationships and environment to allow their businesses to grow.

Our weekly industry briefing on the on-demand and shared transport sector goes out every Friday, and you can sign up for a free trial. If you have any questions about the situation in Spain, or if you would simply like to start a conversation about mobility policy in Europe more generally, then please do not hesitate to contact us.

One year on: reviewing the impact of COVID-19 on the tech industry

As the leading political consultancy dedicated to advancing the policy priorities of the tech community, ... Read more

Are we seeing the emergence of a new gig economy in Europe?

In recent weeks companies operating in the gig economy have been signing agreements with regulators and ... Read more