The recently launched EU-US Trade and Technology Council is a landmark partnership that seeks to advance transatlantic cooperation in trade, economics, and technology. This blog discusses the importance of the partnership and what it plans to achieve, as well as the main policy areas that the Council will explore.

The European Union and the United States jointly represent almost 780 million people and the most valuable bilateral trade and investment relationship in the world. While China became the EU’s largest import source for goods in 2021, the US remains the EU’s biggest trade partner by a large margin based on the balance of trade.

The EU and the US are each other’s biggest source of foreign direct investment. The total US investment in the EU is three times higher than its investment in all of Asia while EU investment in the US is around eight times the amount of the Union’s investment in India and China combined. These investments provide hundreds of thousands of jobs with a third of transatlantic trade comprised of intra-company transfers.

The tech sector accounts for an increasingly valuable portion of bilateral trade. In 2019, the US was the largest supplier of digitally enabled services to the EU, providing 167 billion euros worth, with the EU exporting 130 billion euros worth in return. Indeed, digital industries continue to advance on both sides of the Atlantic with lawmakers in Brussels and Washington D.C. racing to enact legislative frameworks that protect the rights of citizens and establish a level playing field for competition among market players. As the EU pushes ahead with its digital transition, and the new regulations that come with it, the Biden administration is also taking a more proactive stance on the regulation of big tech.

It is in this context that the EU and the US Government launched the EU-US Trade and Technology Council (TTC). The TTC is a forum for the EU and US to coordinate their approaches to trade, economic and technology challenges and deepen transatlantic relations based on shared democratic values.

How will it work?

As part of the new EU-US agenda for global change, announced by the European Commission in 2020, the TCC held its inaugural meeting on 29 September 2021 in Pittsburgh, USA. The Council was co-chaired by European Commission Executive Vice Presidents Margrethe Vestager and Valdis Dombrovskis from the EU-side, and US Secretary of State Antony Blinken, US Secretary of Commerce Gina Raimondo, and US Trade Representative Katherine Tai. The day-to-day work of the Council will be carried out by ten working groups comprised of experts from both administrations (see box).

As highlighted by both sides following the Pittsburgh summit, the goals of the TTC are to expand bilateral trade and investment; avoid barriers to trade; and cooperate on policies related to technology, digital issues, and supply chains. The TTC will develop compatible international standards, boost innovation, and strengthen the technological and industrial global leadership of both partners.

The regulation of big tech remains a significant challenge for both the Berlaymont and the White House. At the EU, the Digital Services Act package, which aims to curb the dominance of predominantly US-founded tech giants operating in the EU market, is concluding its preparatory stages. Similarly, US President Biden signed an Executive Order in July 2021, which cracked down on big tech companies which were deemed to be limiting innovation, executing killer acquisitions and distorting competition, in part, due to their compilation of and access to huge amounts of user data.

Despite a shared desire to introduce more regulation surrounding large market players, there have been no open discussions on harmonising EU/US regulatory frameworks. However, the TTC is addressing another pressing issue: supply chain disruptions and the global semiconductor shortage.

The COVID-19 pandemic exposed major vulnerabilities within supply chains on both sides of the Atlantic. Over the course of the pandemic, Europe’s dependence on imports, particularly from China, were exposed as a vulnerability that resulted in supply chain disruptions. These have been detrimental to the progress of EU initiatives such as the digital transition and the green transition.

In May 2021, the EU announced its new industrial strategy to strengthen the resilience of supply chains in critical areas including raw materials and semiconductors – an essential component in electrical devices. This is an objective shared by the US Government, which stated that it aims to work with partners and allies to reduce vulnerabilities in global supply chains and increase global supplies of semiconductors. This shared desire to secure supply chains is a focus of the TTC.

The principle political players of the TTC, such as Vestager, Dombrovskis, Blinken, Raimondo, and Tao, will convene bi-annually to work on big-picture objectives and address the Council’s most contentious issues. However, the operational components and groundwork of the Council will be carried out by ten working groups. Each of the ten working groups within the TTC, is focused on a key area of policy development. These working groups will act as the main powerhouse for developing cohesive transatlantic policies (see box).

The next meeting of the TTC is slated to take place in spring 2022, coinciding with France’s Presidency of the Council of the EU. Ahead of this, the European Commission has launched the Futurium consultation platform, which provides a dedicated virtual space for all stakeholders to offer their input on issues related to the Trade and Technology Council and each of the policy areas addressed by the working groups.

The TTC has set an impressive, albeit ambitious, framework for bilateral cooperation. The success of the TTC remains to be seen as does its ability to exert any global influence on nations outside the partnership. The EU likely has a more optimistic view in this regard judging by a statement included in last year’s communication on the EU-US agenda for global change which expressed that where both the EU and the US agree, “the world usually follows”. 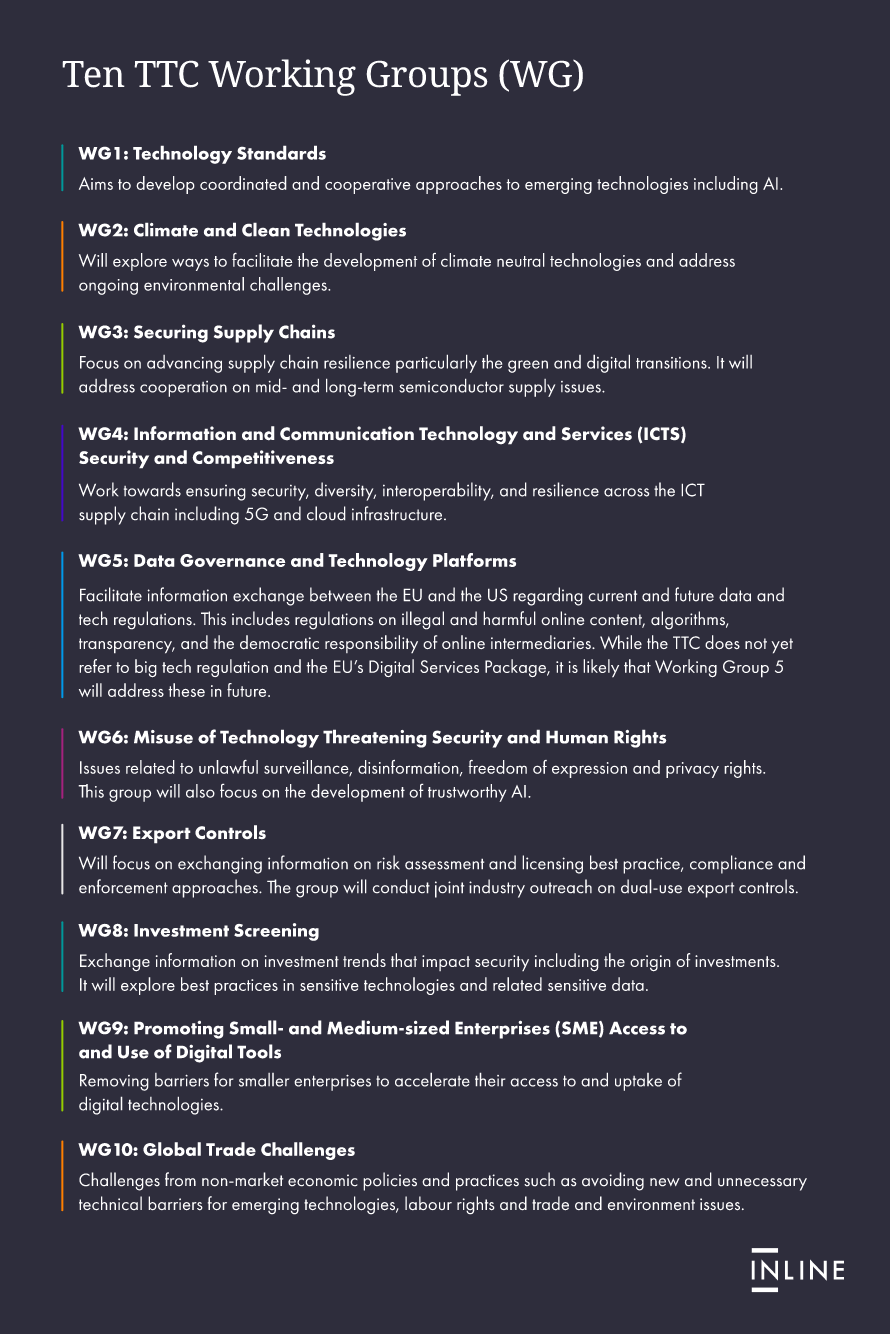 The Swedish Presidency’s Programme – for a greener, safer, freer Europe